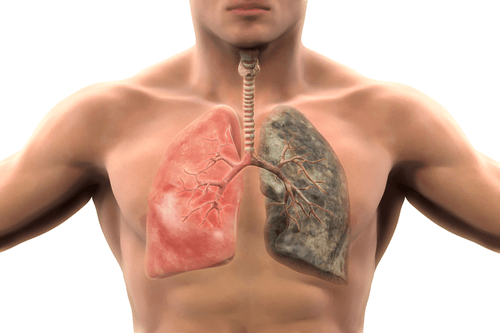 Did you know that cancer is the second leading cause of death globally? That is according to a study by the World Health Organisation. Worse still, lung cancer is the second most common cancer in men and women. The American Cancer Society estimates that in 2020, around 228,820 people in the United States alone will be diagnosed with lung cancer.

With such a high risk of acquiring this cancer, you need to know what it is, what causes it, its symptoms, and how to prevent it. This article seeks to help you know about this type of cancer.

This classification is based on the appearance of the microscopic tumor cells. It’s important to learn how to distinguish them because they spread, grow, and are treated differently.

NCLC is the most common type of lung cancer and accounts for 85% of all lung cancer cases. It’s categorized into three types based on the cell types that are present in the tumor. They include:

This is the most common type of NSCLC cancer in the US. It’s associated mainly with smoking, though non-smokers can also get it. Adenocarcinomas mostly develop in the outer areas of the lungs. They can also spread to the lymph nodes and beyond. If you have this cancer, you’ll likely have a better prognosis.

This type of cancer accounts for 25% of all lung cancer cases. They most frequently arise in the central parts of the chest and stay within the lungs, spread to the lymph nodes, and may grow large and form a cavity.

Large cell carcinomas account for 10% of NSCLC cancers. They are sometimes called undifferentiated carcinomas and are the least common type of NSCLC. They’ve got a high tendency of spreading to the lymph nodes and other distant parts of the body.

Small cell lung cancer is responsible for the remaining 15% of lung cancer cases. They grow more quickly than NSCLC cancers and are more responsive. There are two types of SCLC namely;

Both develop when many cells grow and spread in different ways. Their names are derived from how the cells look under a microscope.

The main cause of lung cancer is tobacco smoking. However, it can also be caused by exposure to:

Lung cancer creates a hormone-like substance leading to a variety of symptoms known as paraneoplastic syndrome. They include:

It would be best if you worked towards preventing cancer than curing it. Practices such as eating fruits and vegetables, staying away from cancer-causing agents, and avoiding smoking can help greatly. A ct lung screening can also help in identifying it in the early stages. That will help you work on curing the cancer before it spreads.

Lung cancer is a major cause of death in the world, and it can stifle your dreams and thwart your plans. Knowing its causes, symptoms, and prevention can help you avoid it. To help prevent it, start by staying away from agents that cause it.

PreviousPrevious post: Some hidden facts which you must know
NextNext post:What You Should Know About the Paragard Lawsuit